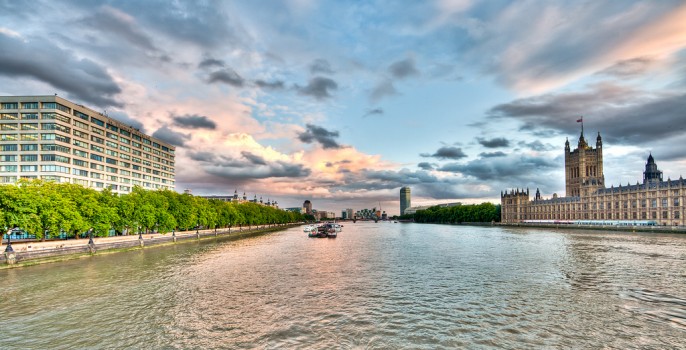 The isle of Great Britain, the ninth largest island in the world, is host to England, Scotland and Wales. The Acts of Union in 1707 brought the kingdoms of Scotland and England together to form a single Parliament governing the island. Great Britain has seen its share of struggles in its storied history, yet remains a stalwart icon of democratic ideals. The Magna Carta, an agreement between King John and rebellious barons, has become a symbol of personal liberty. To this day, the monarchy retains only marginal power – all of the legislation in the country is put forth by Parliament, where the democratically-elected House of Commons holds power.

Great Britain is home to the prehistoric monuments Stonehenge and Avebury, countless examples of classical and neoclassical architecture, and the expansive castles and palaces of the English monarchy. England produced William Shakespeare, widely regarded as the greatest writer in the English language. Loch Ness, the most famous lake in the world, is entrenched in the Scottish Highlands. The amount of history, culture and art in Great Britain dwarfs its size – the entirety of the island is barely a third the area of Texas.

Liverpool is an 800-year-old city situated in the Northwest of England. It’s home of the “scouser,” a word synonymous with the Liverpool accent and dialect. Liverpudlians are known for their sense of humor; many successful comedians have come from the city. Liverpool has a rich musical culture, including a title that would make any city jealous – the birthplace of the Beatles. The population is diverse in the port city, housing the oldest Chinese community in Europe. 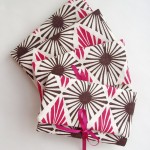 Helen of Olganna designs handmade bags, clutches and totes from her home in the ancient city. She first studied fashion and textiles before moving on to footwear design and manufacture. She worked in the fashion industry for 10 years in quality assurance, but switched to being a stay-at-home mom and business owner after Kate (3) and Ryan (1) were born.

Come 7 o’clock when the kids go to bed, Olganna starts and my bags are created.

Helen traveled the world in her career – assessing factories, developing product and overseeing the production of hundreds of thousands of shoes, bags, sportswear and children’s wear. She’s now settled back down with the kids and enjoys the sights of her home town.

The waterfront is a must-see destination for visitors to the city. It has Liverpool heritage museums, including the Merseyside Maritime and Beatles museums. The Pier Head has the Royal Liver Building, an exceptional architectural structure with majestic Liver birds on the clock towers.

Have a bite to eat in one of the many restaurants on Albert Dock, then take in the latest exhibition of contemporary art in the Tate Liverpool. Afterwards, take a walk through the Liverpool One shopping district up to the historic St George’s Hall, regarded as one of the finest neoclassical buildings in the world. Keep an eye out for the decorated Lambanana sculptures throughout the city – they make for a great photo-op!

Bags have been a new challenge for Helen; she designs them all from scratch. As a product developer, her interest is in the entire process of creation rather than just the end result. See more of Helen’s creative work in her Etsy shop and on Facebook. 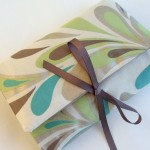 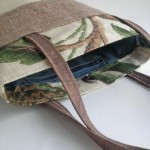 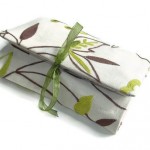 Edinburgh is the breathtaking capital of Scotland, located on the eastern seaboard. Dominating the skyline is the historic Edinburgh Castle, a commanding fortress dating back to the 12th century. Greenery abounds in the city – parks and gardens blanket the landscape, including the stunning Royal Botanical Garden and the massive Princes Street Gardens public park. Edinburgh’s vast array of neoclassical architecture earned it the nickname Athens of the North.

The capital city isn’t too steeped in tradition to have a little fun – Edinburgh is known as the festival capital of the world. The International Festival, a three week event celebrating the performing arts, draws tens of thousands of attendees from dozens of European countries eager to see the music, opera, drama and ballet. New Years is a sight to see in the city; the Hogmanay festival features five days of celebration culminating in a massive New Year’s Eve street party. 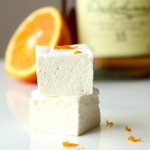 Maggie Simak of Zukr Boutique is no stranger to indulgence – she and her husband David create sinfully delicious artisan sweets and pastries. David has worked as a pastry chef for 15 years in restaurants and luxury hotels around the world. He works full-time as a head pastry chef, but dreams of opening his own pâtisserie.

David’s dream may yet come true – the couple starting selling confections online, but have been increasingly pressured by local fans to open a shop in Edinburgh. Zukr Boutique has been gaining notoriety – they’ve recently been featured on Etsy’s blog, Wedding Magazine, and The Telegraph.

I love sweets, so we’re a sweet match! 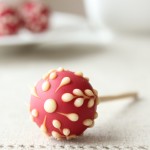 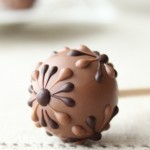 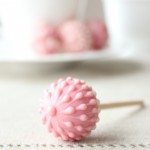 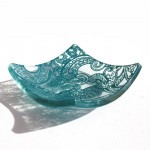 Rachel of Rachel Elliott Glassworks was born in Surrey, England and gets some odd looks with an English accent in Edinburgh. She moved to the city a decade ago to study Architectural Glass at the Edinburgh College of Art. Rachel creates kiln-formed glass ranging from small sculptures and jewelry to one-off pieces for exhibition and installation.

I’ve always been a maker, but I was drawn to glass after stumbling upon a hot glass studio in New Zealand while traveling. I spent two days transfixed by the family working together, blowing and engraving glass.

In 2009, Rachel set up a glass studio in Edinburgh – it’s a bit pokey at 200 square feet, but every inch of the place is packed. She has three kilns, one of them the largest flat bed kiln available.

I knew space would be restricted, so all of my workbenches are multipurpose. The tops hinge and secure to the walls behind, allowing for more space or access to the light box or steam area.  It’s a proper Heath Robinson affair; short of installing a winch system to the ceiling, every little crevice is used.

Rachel teaches from her studio, including a popular class on screen-printing techniques that she uses to apply kiln-fired enamel to her works. She loves the technical challenge of working with glass in different ways, and troubleshooting after some “unexpected” results. Her work is representational, attempting to catch the viewer’s eye and invite them into her world.

It’s difficult to realize it may take a lifetime to become the artist you want to be. 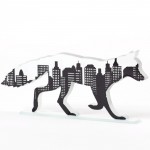 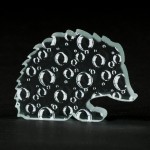 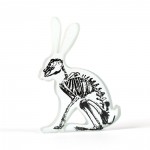 Located on the River Thames, London is the capital of England and the United Kingdom. First settled by the Romans, London grew to become the largest city in England by the 11th century. Punished brutally by the Black Plague in the 13th century, the city lost nearly a third of its population. The Great Fire of London in 1666 laid waste to much of the capital – over 85% of the city’s inhabitants lost their homes to the inferno.

Despite setbacks of circumstance and a fluctuating stability, London always seems to bounce back and reclaim its status as the world’s most-visited city. Its 43 universities are the highest concentration of higher education in all of Europe. It’s home to the British crown and four world heritage sites, including the Tower of London and Westminster Abbey. The London Underground is the oldest underground railway system in the world. 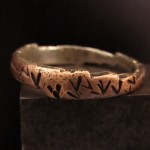 Hugh Somerville of HCS Metalsmiths finds himself at home in the city’s sprawling streets. A Londoner born and bred, Hugh learned to work with metal at a young age from his father. His wedding rings for men escape the traditional and provide a more creative, masculine ring to suit the customer’s personality. Styled from textured copper with a sterling silver lining, Hugh’s work eschews the generic gold band for a more steampunk, rustic or industrial feel.

London is a huge city with a vibrant population. It’s very busy and full of hustle and bustle. I love the long history with so many old buildings and streets. The old traditions like the changing of the guard and the Lord Mayor’s show contrast the modern fashion, art and music scenes. It’s an exciting place to live and work.

Everyone who visits London should go to Covent Garden and see the street performers. There are fire eaters, jugglers, buskers and all kinds of entertainers there. Camden at the weekend is great fun too, with many market stalls selling food and handmade goods.

Hugh started designing and making wedding rings for men after seeing the disappointing rings available for men – essentially scaled-up women’s rings. The technical challenges of metalwork styles keep every day interesting; he can hardly remember a time when he wasn’t soldering or hammering.

My father is an engineer; he taught me so much about what I do, despite the fact that he worked with huge machinery and I work with tiny rings. He’d ask me to measure something and expect the answer to be correct within a thousandth of an inch. I can talk with my dad all night about alloys and welding. 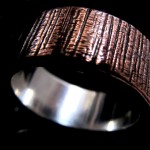 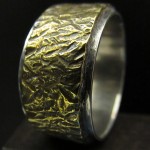 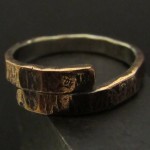 Hugh works nearly every waking moment, and often finds his workshop full of people – friends coming to borrow tools or asking him to make an odd bracket, or just coming to have a beer and some food. Sometimes he’ll get away to the Tate Modern, as much to admire the incredible steelwork of the building as for the art.

The HCS Metalsmiths Etsy shop is lined with beautiful photos of Hugh’s artistic rings; for such one-of-a-kind pieces that may be worn for a lifetime, the rings are worth every penny of their modest prices.

It’s hard to stand out on Etsy; it’s equally hard to stand out as a handmade artisan in Great Britain. A country so rich in the arts deserves a fair shake in the online marketplace. Etsy’s UK site is only the tip of the iceberg, I hope to see more shops opening and flourishing across the Atlantic as time goes on.

« Vendor Virgin: Must Ask Questions The Change I Fought But Love »