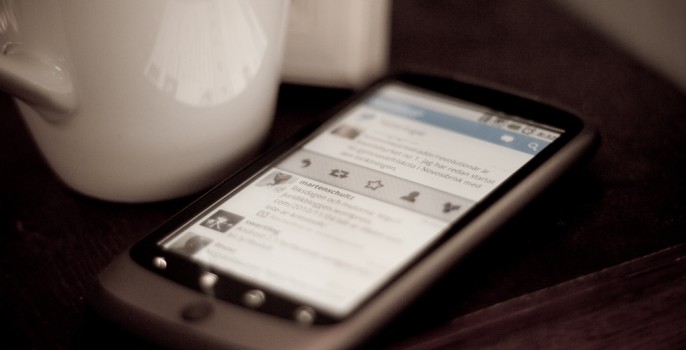 Breaking through on Twitter is tough. Chris Zielski of Copper Leaf Studios joins us in this guest blog to show you how to get the most out of Twitter as an Etsy seller and crafty entrepreneur.

Twitter gets a bad rap; it’s known as the largest venue in the world to post what you had for lunch. I’ve heard it all – it’s great, it sucks, it gets you tons of views, it’s a waste of time. It’s all true.

Twitter is people being real people. Some people are cool, some are dingbats, some are All Business, some people love to talk about themselves all day. It’s the curse and the beauty of Twitter – it’s chock full real people. Surrounding yourself with the right people can make all the difference.

Think for a second about someone you admire, picture them in your head. I don’t mean your parents or teacher, I mean someone you want to be when you grow up. Someone who’s a few steps ahead of you on the career ladder. What would you give to be in an elevator with that person? What would you say if you had their undivided attention, if only for a moment?

That person might ignore you, or turn out to be a real jerk; such is life. But sometimes, something magical happens and a connection is made. Twitter gives you the opportunity to make that connection with someone who would normally be out of reach.

Some people approach Twitter like a popularity contest. I say connect with only a few people, not a few hundred. Pick carefully and cast your net wide, don’t just follow a bunch of Etsy people. Think of magazines that you like, blogs you follow and people that you admire. See who they talk to, follow the conversations. Want to talk to somebody? @Mention them, it’s that easy.

Friday is a big day on Twitter, it’s known by the hashtag #FollowFriday. People pick other Twitter denizens to recommend following. It’s a great time to see who your favorite people admire and promote. The best #FollowFriday tweets tell you something interesting about the person.

#FollowFriday @CopperLeafSt because she’s an uber-cool artist, and a fun person!

Disclaimer: yes, that’s me. While I am an artist, no money back guarantee on the coolness factor.

Don’t post links on Twitter. Just don’t. You’ll make more real connections and have more people genuinely interested in you if you avoid spamming them. People who are interested will click through to your profile and find your link in the Bio. Trust me. Even if they don’t, breathe through it. This is about making meaningful connections, not annoying people.

Think outside the direct-sales box. What’s more valuable, getting one sale or getting featured on a site that could lead to many sales? Or developing a relationship with a mentor that will teach you a solid marketing strategy? Or getting featured in a magazine?

Word of mouth is the most powerful sales tactic in the world. Take notice that featured sellers and QYDJ people always mention it. The caveat of word of mouth is that it’s hard to figure out how to make it happen. THIS IS HOW. But you ruin it if you spam links. If you’re not making a personal connection with your followers, it’s not doing you any good. Keep a long-term vision.

I use Twitter a lot; I don’t have a million followers, but the ones I have are high-quality. I’ve had some amazing experiences.

I follow lots of business/marketing people because I learn a lot from them and their blogs. I found out that one of the people I follow is coming to my state next week, and we’re going to do lunch. Someone who charges three-figures an hour for business advice is going to be sitting across from me, eating chicken salad, and shooting the breeze for free.

I work in metals, so I follow (and get followed by) people in the copper mining industry. A major copper blog showcased my work in an artist feature because we made a connection on Twitter.

I met a super cool woodworker that I’ve collaborated with on many projects. He’s given me a lifetime of tips that will improve the woodworking part of my craft.

I connected with someone I admire who gave me a great lead on a killer gallery. I’ve had this happen with multiple artists. I make a point to give them suggestions, and they’ve returned the favor ten times over.

I’ve made amazing friendships with people from all over the world. Twitter has enriched my life and promoted my craft. Make it do the same for you.

Chris Zielski of Copper Leaf Studios creates etched metal artwork in her studio in Cleveland, Ohio. She sells her copper and metal art on Etsy and at CopperLeafStudios.com. Naturally, you can find her on Twitter at @CopperLeafSt.